uh, y'know, the sounds that sound good together... sometimes... and sometimes sounds like the disgusting "squish squish" sound Slicker's mom makes whenever she walks

I sometimes love listening to bands cover, or try to cover famous songs. I have an obscure punk band covering "New York, New York". I also have a single of Devo covering "Head like a hole".

I've heard Korn cover Metallica's "One", which is pretty good. I've heard Metallica cover Korn's "Blind" not quite the same, but has it's own merrits.

I think covers have their own place in the music world. Good and bad covers.

Tori Amos' cover of "Smells like Teen Spirit" Nirvana's cover of "The man who sold the world" or "Lake of fire". Heck I'm even a fan of GN'R's Spaghetti Incident, whole album of them doing covers.
"He's a guy who gets up at six o'clock in the morning regardless of what time it is."
Top

Lemmy and Ted Nugent doing "Tie your mother down" is awesome

Rainbow doing "Still I'm Sad" is also fucking AWESOME- there's a couple REALLY good like performances on youtube, ones from the 70's

Judas Priest covering Johhny B Goode was awful
Vince, NO!!!!!

I just ripped off most of your pubes!!
Top

Didn't Limp Bizkit try to cover the Who's Behind Blue Eyes? That sucked. I think they actually used a Speak N' Spell in the song.
Top

Life of Agony's cover of Dont you forget about me is flat out awesome.

I swear to God the other day I heard Lemmy singing Christmas songs and it was the shit! He's the only person I know of that has a voice like that so I don't know who else it could've been.
Sweet berry wine!
Top

It was probably from this cd.

We Wish You a Metal Xmas...and a Headbanging New Year 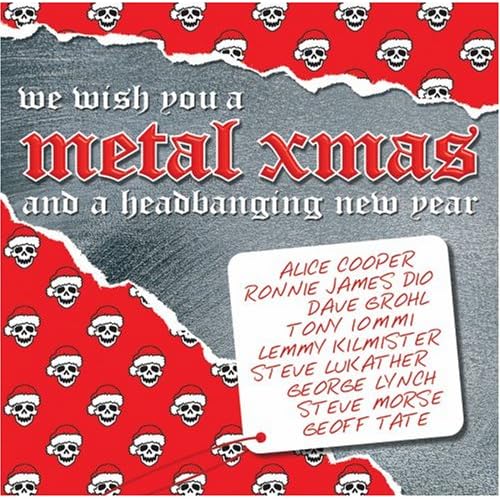 I was listening to Twisted Sister's Christmas album earlier today. That motherfucker rocks.

So back to non-holiday covers...

I like the Wallflowers cover of "We could be heroes".

I'm not much of a Smashing Pumpkin's fan, but Billy Corrigan does a nice cover of Fleetwood Mac's "Landslide".

This is Joan Jett's cover of the Dave Clark Five's "Bits and Pieces" at the Rock and Roll Hall of Fame.

Presidents of the U.S.A. did "Video Killed the Radio Star". It wasn't a whole lot different than the original.

Garth Brooks did an interesting version of "Hard Luck Woman".

Speaking of The Who, Van Hagar did a live version of "We won't get fooled again". Van Halen's covers of "Pretty Woman" and "You Really Got Me" are so old now, most people probably don't think of them as covers anymore.
Top

Back in 2005 Paul Anka (yes, Paul Anka) released an album of covers, swing-style.
They're pretty awesome in a fun kind of way.
Smells Like Teen Spirit
Everybody Hurts
Eye Of The Tiger
Wonderwall
Black Hole Sun
Jump
Tears In Heaven

I'd actually like to get the album. Could be fun.
"As they say in China, 'Arrivederci'!"

Not a fan, but Bowling for Soup beat the shit out A Flock of Seagulls on "I Ran (So Far Away)."

I don't outright hate Foo Fighters. (They're not at the top of my list, either; I just don't know most of their stuff.) However, I just didn't like what they did to Have a Cigar, that's all.
Shit. I can't think of a good signature.
Top

Back to the holiday thing. The song I heard was definitely Run Rudolph Run and it sounded AMAZING!


Lemmy's voice is a mix of Fergie and Jesus.
Sweet berry wine!
Top

That's the one. Thanks.
Top

WHEN I WAS LITEL I HAD HAND ME DAWN SHEETS, 1 WAS THE NEW KIDS ON THE BLOCKS, THAT WAS THE WORST CUVER EVER MY FRIENS ALL LAFFED AT ME.

NOW THAT IS A GOD DAM GAYE ROBAT!!! LOOK A THAT FUCKIN DICK ON HIS HAND, HE PROBLY SUX IT EVER NITE CUZ HE IS A GAY FAG LIEK U FAGGETS!! MAN, U FAGS LIEK ROBAT DONG HANDS UP UR GAY ASSES DON'T U, HA HA HA HA HA HA I NEW IT!!!
Top
Post Reply
68 posts

Users browsing this forum: No registered users and 3 guests